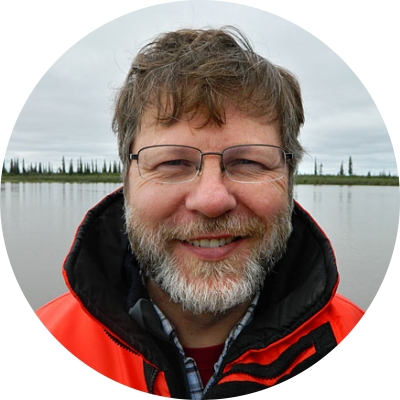 I am interested in the behaviour of permafrost terrain in response to natural and artificial disturbances such as climate change and construction. I am particularly concerned with questions that are associated with management of human activities and structures in the North, such as the anticipated additional maintenance costs that climate change will induce for infrastructure built on permafrost. I am interested in developing field methods for mitigating some of the effects of climate change on permafrost, especially by manipulation of snow cover. In addition to projects that stem from these interests, I am also pursuing studies regarding the evolution of permafrost terrain and its characteristics, such as the behaviour of drunken forest above permafrost, the development of ice-wedge polygons, subsidence of the ground surface with active-layer deepening, and effects of vegetation development in drained lakes on ground temperatures.

Research Program in the NWT

The field investigations principally take place on NW Garry Island and at the Illisarvik experimentally drained lake on Richards Island, both sites near the western Arctic coast. At both locations we monitor ground temperatures to depths of up to 50 m, concentrating on conditions in the near-surface, i.e. the upper 10 m of the ground. At Garry Island the current record began in 1997, but we are able to compare these measurements with data collected by the late Dr Ross Mackay of UBC in 1969-71. These provide some of the longest records of temperature change in permafrost induced by climate. At Illisarvik we are also measuring changes in the elevation of the ground surface due to thickening of the seasonally thawed active layer above permafrost. In soils, the top of permafrost is characteristically ice-rich, so deepening of the active layer leads to thawing of near-surface ice and settlement of the ground surface. At Garry Island we have been measuring the effects of climate warming on ice-wedge polygons, and have been studying whether the polygons subdivide by infrequent extra cracking during cold winters or as large ice wedges cease to crack due to accumulation of snow near them.