Born and raised in Newfoundland & Labrador, I have always been fascinated with the outdoors, wildlife, and communities that have close relationships with wilderness. With a bachelor’s degree in Environmental Studies, I’ve also had the opportunity to work in national parks and live in Aboriginal communities, such as Squamish, BC and most recently Fort Chipewyan, AB.

My project emerged after I had the opportunity to live and work in Fort Chipewyan as a Parks Canada employee. I have thoroughly enjoyed getting to know local people in communities around the park and understanding the relationship between people and the environment and wish to continue my understanding of this relationship. I’m hoping to continue my education while also contributing knowledge to local areas. With a particular interest in wildlife-human relationships, I’ve decided to pursue studies focused in the field of Human Dimensions of Wildlife. 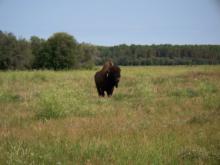 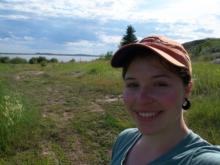 Although this is an independent study that I’m conducting as a student of Memorial University, I’m working in cooperation with Parks Canada and the Aboriginal groups in the communities of Fort Chipewyan, Fort Fitzgerald, and Fort Smith. These groups include the Athabasca Chipewyan First Nation, Fort Smith Métis, Métis Local 125, Mikisew Cree First Nation, Salt River First Nation, and Smith’s Landing First Nation. Parks Canada and these Aboriginal groups are interested in what local people think of bison and how they are being managed or could be managed in the future.

With the presence of disease in the park bison population, park management is faced with making decisions about disease containment, while also protecting this threatened species respecting the animal’s importance to the local communities. Is disease amongst bison a concern for local people? Has it affected the importance of the bison to local people? Collaboration with local communities, particularly the Aboriginal groups in and around the park, will be essential to the development of a successful wood bison management strategy.

For the purpose of this research I’m spending time in Fort Chipewyan, Fort Smith, and Fort Fitzgerald in summer 2012. In May 2012 my supervisor, Dr. Alistair Bath, and I traveled to each of these communities to meet with local Aboriginal groups to listen and learn about how to shape this study and provide something useful to the communities. For the purpose of data collection I will be using a quantitative door-to-door survey to get a broad idea of what people think about bison and bison disease. I will also be meeting with small groups of people from each local Aboriginal group for in-depth discussions which will provide more context to this research.

In terms of knowledge dissemination, I am not only writing a thesis, but will compose a short report on the results. Both documents will be made available to community residents through the Aurora Research Institute, Band Councils, Métis Nations, Municipalities, and Parks Canada.  If possible, I will also to return to each community in 2013 to discuss the research results with community members.

I look forward to returning to the area for some great discussions on what bison mean to you!