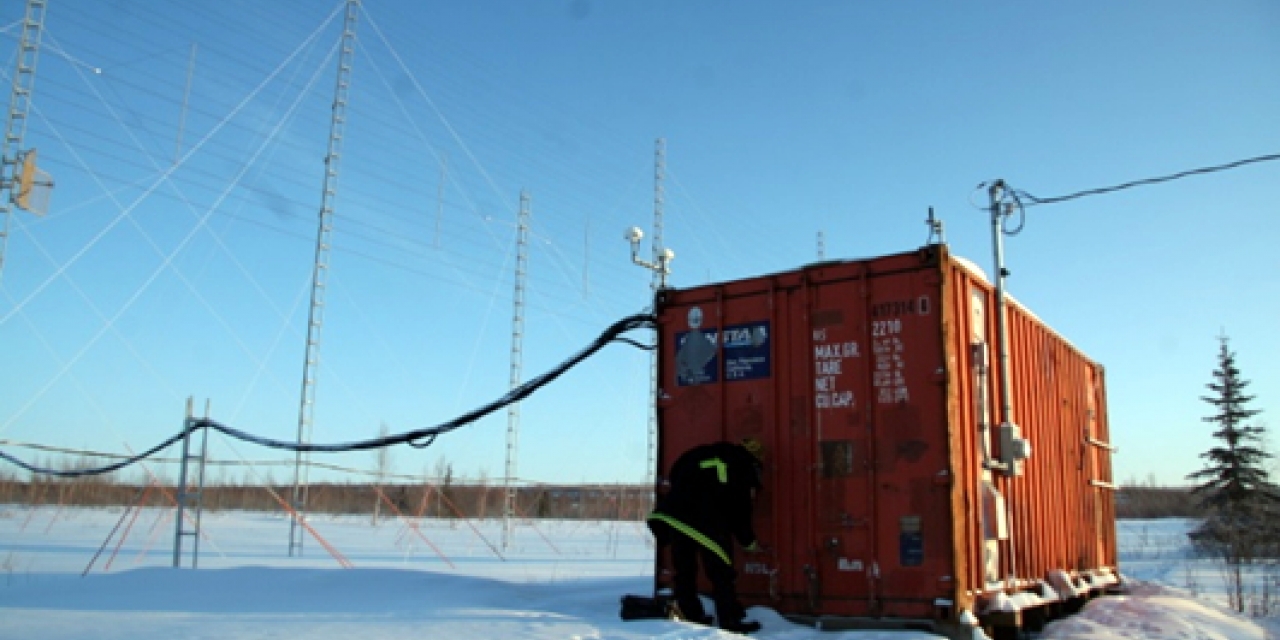 Space weather, fuelled by energetic particles and radiation from the Sun, can cause massive power outages, pipeline corrosion and radio blackouts, and can degrade GPS positioning and increase radiation dosage to airline pilots and passengers. The radiation can penetrate spacecraft and spacesuits, damage equipment and bombard satellites, wreaking havoc with electronic systems.

SuperDARN (Super Dual Auroral Radar Network) is an international consortium of research groups who study space weather by operating high-frequency radars (24 radars as of December 2010) in and around the Earth's northern and southern auroral zones. These high-frequency radars are known as the PolarDarn radars.

The north magnetic pole lies near Eureka, Nunavut. Only two PolarDARN radars are needed to view the entire "north polar cap" region centered around the north magnetic pole. The first radar that was needed to view this region was installed in Rankin Inlet, and the second in Inuvik. These radars measure "space weather" wind maps. Just as the normal winds in the atmosphere near the ground are driven by high and low pressure systems, space weather winds are driven by high and low voltage systems, because the winds in space are caused by the voltage-driven motion of electrically charged particles that exist at high altitudes. 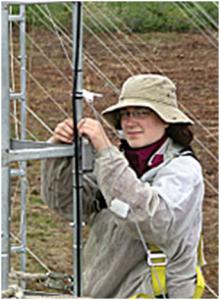 Marian Thorpe, a student from the University of Saskatchewan, helps install the Inuvik antenna array. Photo courtesy of Kathryn McWilliams. These high altitude wind (voltage) maps are available on the Internet after only a few minutes delay. Such information is important for all satellites, because satellites fly in this high altitude weather. Satellites are extremely important to the North because they transmit most communications signals such as telephone, TV, and internet. Recently, scientists have found that high-altitude weather is connected to low-altitude weather, and the PolarDARN radar observations will help us to understand these connections. Because the "solar wind" energy that flows continually from the Sun to the Earth goes most directly to the polar regions, the observations by the Inuvik and Rankin Inlet PolarDARN radars are critically important for understanding of space weather.

This is an international effort that includes Canada, USA, Japan, France, Great Britain Australia, Norway, Iceland, Finland, New Zealand, Italy, and South Africa.  The University of Saskatchewan is the Canadian leader of this program through the Institute for Space and Atmospheric Studies (ISAS).  More information about SuperDARN can be found at http://www.usask.ca/physics/isas.

The Aurora Research Institute (ARI) is the custodian of the Inuvik site. The custodian is responsible for the routine maintenance and upkeep of the site, and occasionally some minor trouble shooting.

The above description was adapted from http://www.usask.ca/physics/isas for use on the ARI website, with the permission of the University of Saskatchewan.