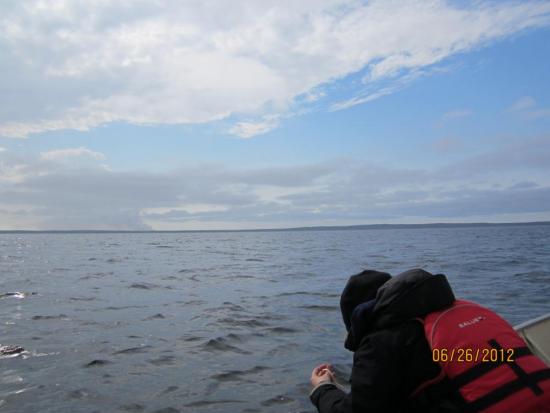 In 2010, the Aurora Research Institute (ARI) partnered with Environment Canada on the long-term Water Quality and Aquatic Ecosystems Health project. This collaboration, in effect until 2014, will result in new knowledge and data that will contribute to the conservation and restoration of water resources and aquatic ecosystems in the western Canadian arctic.

The overall goal of this project is to better understand the effects of climate change on arctic freshwater systems.  This will be achieved through the following three primary objectives:

In 2010, twelve experimental enclosures, called mesocosms, were installed in a small tundra lake located next to Noell Lake. Each enclosure was dosed with different amounts of sediment collected from the surrounding lake catchment, in order to assess the effects of permafrost degradation on the aquatic foodweb. 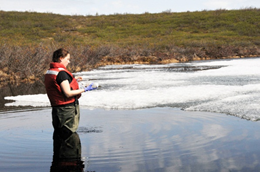 In late August 2010, water samples and biological specimens were collected from 26 tundra lakes located on Richards Island and the Mackenzie Upland region.  Water samples were also collected from all water sources leading to and from these small lake systems.  The goal of this work was to assess the effects of permafrost degradation on the landscape-level processes that influence the geochemistry and, in turn, the biological communities of tundra lakes in this region.In late September 2010, prior to freeze-up, an automated ice buoy and subsurface mooring system was deployed in Noell Lake for continuous monitoring of weather conditions, lake ice cover (for example, ice formation, growth over winter, breakup in spring), light penetration into the lake through winter ice, and water quality.  Data was successfully collected during the 2010/2011 and 2011/2012 winters.  Additionally, ice surveys were taken on Noell lake, in order to validate the data collected by the buoy.

During 2011 and 2012, water samples and biological specimens were periodically collected from a number of locations on Noell Lake.  The goal of this sampling regime was to assess the spatial variability of water quality parameters within a large lake system, as well as to validate the water quality data collected by the Noell Lake buoy and mooring system.  More information on Noell Lake water quality parameters can be found here. Permafrost degradation results in an enrichment of the lake system.  Top-down predation by zooplankton regulates the abundance of phytoplankton in these systems.  If permafrost degradation continues to increase, as predicted by current climate models/scenarios, the structure and function of arctic aquatic ecosystems will be significantly impacted.

The geochemistry of surface flow and lake water appears to be controlled by climatic and hydrologic parameters, which are seasonally variable.  Most noticeably, in spring, when snow melt water has relatively low ionic concentrations, there is a dilution effect on water run-off into the lakes, which in turn dilutes the lake water. Water run-off from shoreline retrogressive thaw slumps exhibits high concentrations of major ions, relative to water run-off from other catchment sources.  This contributes to relatively higher concentrations of major ions in the lake water. 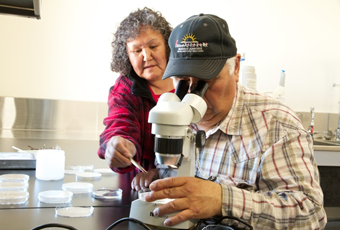 ARI is fully committed to supporting Environment Canada as they pursue the objectives of this project.  Since entering into this partnership, ARI has facilitated field and laboratory research conducted by EC staff and graduate students in the Inuvik region. ARI technicians and summer students have actively helped with a variety of tasks, including installation of monitoring equipment in study lakes, weekly water sampling, and laboratory analyses of water quality.The research team has given a number of community presentations within the Inuvialuit Settlement Region (ISR).  In spring 2012, with the assistance of ARI and local elders, the research team did an Arctic Hydrology and Ecology workshop with students from Samuel Hearne Secondary School in Inuvik. The research team plans to carry out similar workshops in Inuvik, as well as in other communities throughout the ISR.

This project has now ended.