The Husky Lakes area is of great cultural and traditional value to the Inuvialuit. Situated between Inuvik and Tuktoyaktuk (Tuk), the Husky Lakes Watershed is a ‘true’ Arctic watershed, in that all waters originate north of the Arctic Circle. Fishing and hunting in the Husky Lakes by local people occurs throughout the year. Lake Trout and other fishes, as well as other wildlife, are harvested for subsistence consumption, to provide food for dog teams, or as recreational activity. 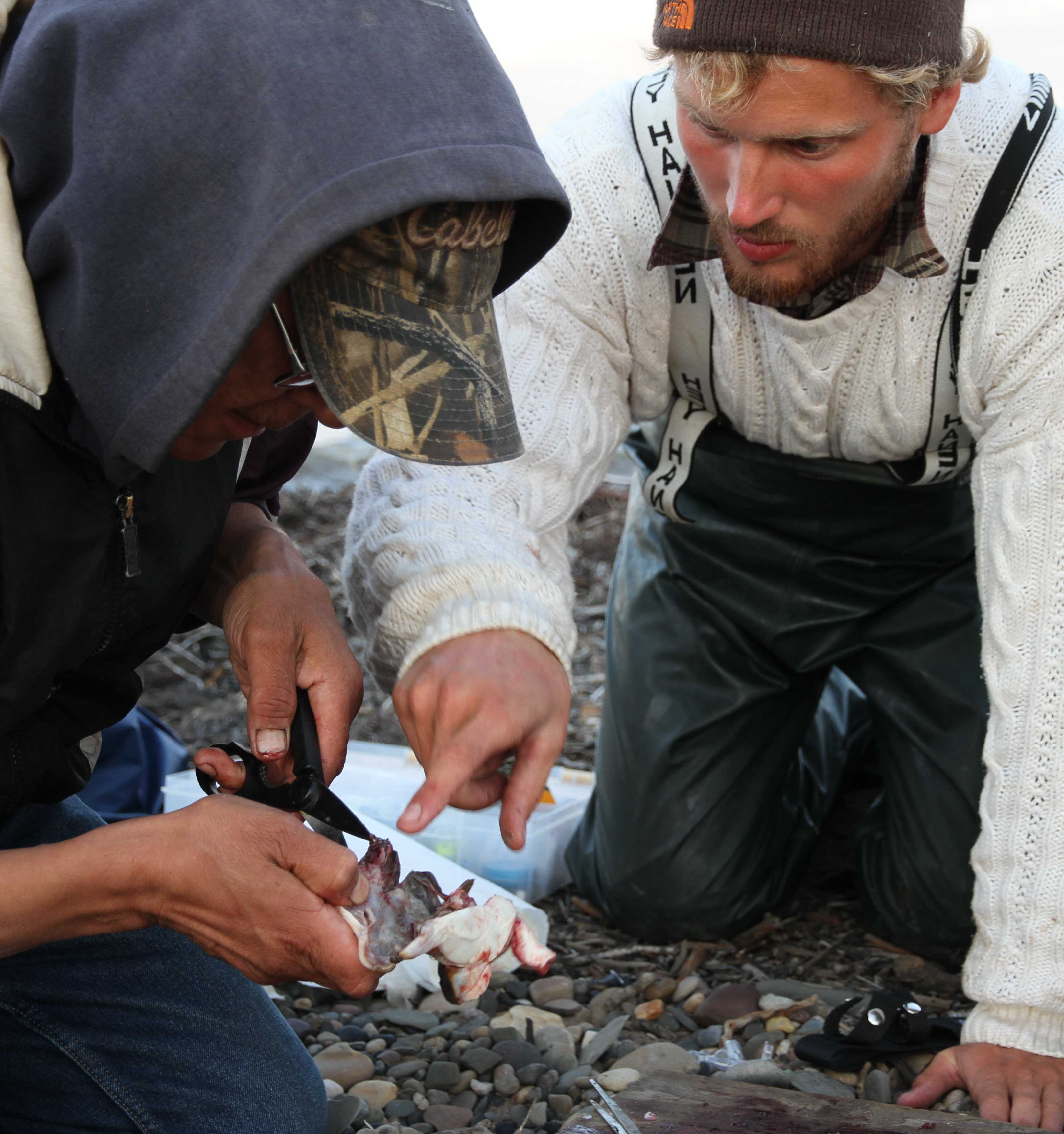 This project evaluates the hydro-climatic drivers of contaminant transfer in aquatic food webs in the Husky Lakes Watershed. Click here to watch a short video explaining the project.

The idea for this research project came about during consultations with stakeholders in Tuk. Members of the Tuk community pointed towards the Husky Lakes due to its importance to the community. Subsequently, an initial proposal was presented to the Tuktoyaktuk HTC in 2010. The proposal was developed by the researchers, with significant input from the Tuktoyaktuk HTC, local stakeholders and local experts. Funding was secured in 2011, allowing this multi-year project to commence in the fall of 2011.

The current study is co-lead by the Aurora Research Institute (Inuvik) and the University of Victoria (Victoria, BC). Community involvement and support is extensive and important for this study, as it is designed as a pilot project for future monitoring. It is inherently interdisciplinary, and involves many Inuvialuit, southern researchers and institutions in Tuk, Inuvik, Victoria, Winnipeg, and Peterborough. The study has three main aspects:

1. Traditional Knowledge on the Husky Lakes Ecology and Fishes.

Jennie Knopp conducted semi-directed interviews on Traditional Knowledge (TK) of the fish and ecology of the Husky Lakes with 14 local experts in Tuk in February 2012. Under Jennie and Chris Furgal’s training, one of the MSc students also completed three TK interviews in Inuvik in August 2012. Topics covered included fish species composition, fish health and fish habitat, as well as knowledge about the aquatic ecosystems, food webs and lake ice conditions. Many hours of interviews were audio recorded and are in the process of being transcribed verbatim. Once the transcriptions are complete, the interviews will be analysed to identify common and emerging themes in the TK shared by local experts. Participants mapped local fishing locations and areas of significance to the Husky Lakes’ food webs and ecosystem. Verification meetings will take place in Tuk and Inuvik to ensure that the knowledge has been documented accurately and that the interpretations of the TK are correct from the perspectives of participants. As this is a mixed methods project, TK will be used to inform sampling locations and parameters within the scientific sampling efforts.

2. Mercury Concentrations in the Food Web and Fishes.

Shannon McFadyen’s MSc research project investigates the cycling of mercury in the Husky Lakes to shed light on 1) how much mercury is transferred to fishes, and 2) where mercury might be coming from. Mercury is transferred up the food chain to top predators over time via two mechanisms known as bioaccumulation and biomagnification. Shannon’s hypothesis is that cumulative effects of climatic variability and land use changes (such as resource development) result in changes in the local physical environment (i.e. salinity, water chemistry), which may influence food web structure and subsequently affect contaminant transfer to fishes. Shannon has looked at the current spatial variability of mercury concentrations in edible fishes within the lakes, and also examines the mercury “fingerprint” of fish by determining mercury stable isotope ratios. This sets a baseline for potential future changes. Click here to watch a short video about Shannon’s research project.

3. Evaluating the Movement of Fishes through Husky Lakes.

Lake Trout otoliths (a fishes inner ear bones) are primarily calcium carbonate and are continuously growing in alternating layers of aragonite and proteins, much like the annual rings of a tree. Along with calcium carbonate, trace elements are taken up from the water the fish dwells in and are deposited in otoliths in each year. The mixing of fresh and marine waters in Husky Lakes likely results in variable concentrations of trace elements. Ben will analyze variations in these elemental levels in water and otoliths to see if movement into different regions of Husky Lakes can be inferred. Benjamin Kissinger’s MSc project focuses on investigating the movements of Lake Trout in Husky Lakes using otolith microchemistry as an analysis tool. Understanding the potential movement of Lake Tout will help understand 1) where fish are taking up mercury, and 2) what limitations the salinity gradient has on their distribution and utilization of Husky Lakes. Knowing the movement patterns is also essential for stock assessment and management of Husky Lake. 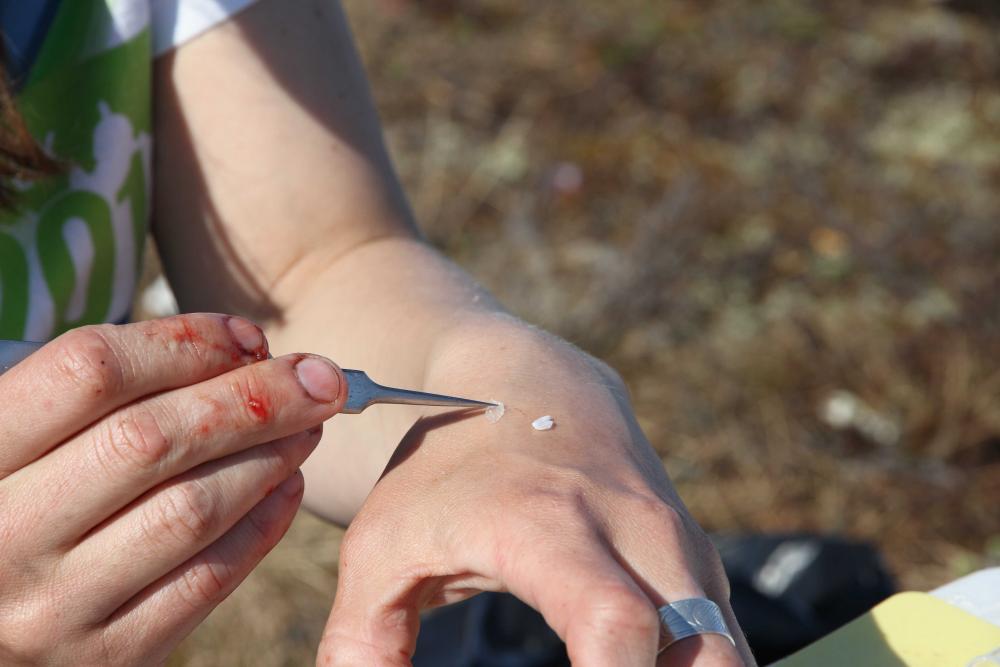 The results of this study will provide local communities with a record of Traditional Knowledge on the Husky Lakes, a baseline of mercury concentrations in edible fishes for continued monitoring, insights into the Husky Lakes aquatic food web dynamics and the susceptibility of the lakes to climate and land use changes, and new insights into the movement of fishes that are relevant to the future management of the Husky Lakes fisheries. Throughout the project, we strive to provide the communities with frequent updates on findings.

If you have any questions about the CSI Husky project, please contact the research team at csihusky@uvic.ca or check out our Facebook page.

This project has now ended.