Notice: Aurora College Research Grants are currently under review and will not be available this year 2021-2022 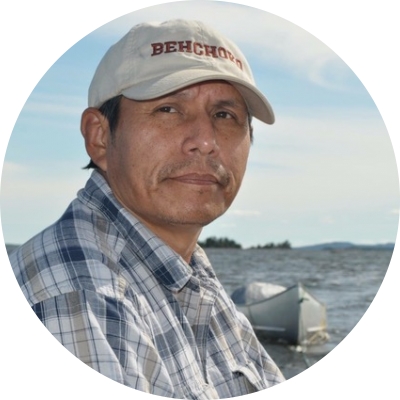 Dr. John B. Zoe was the Chief Land Claims Negotiator for the former Treaty 11 Council of the NWT from 1994 until its conclusion with the establishment of the Tłı̨chǫ Government in 2005. John is now a senior advisor to the Tłı̨chǫ Government.  Dedicated to preserving, reviving and celebrating the culture and language of the Tłįchǫ people, he helped revitalize canoeing with Elders to strengthen youth to follow the traditional Trails of our Ancestors.

He has an Honourary Doctor of Laws from the University of Alberta in recognition of his work in the development of the new government, as well as his contributions to projects that are built upon a foundation of Tłı̨chǫ language, culture and way of life.

His own publications include articles on Tłı̨chǫ ethno-archaeology and place names, sacred sites, and the history of settlement types and traditional architecture.