Our priority at this time is the health and safety of the Aurora College/Aurora Research Institute community, as well as the larger NWT and research communities. In response to the global pandemic of COVID-19, the Western Arctic (WARC), North Slave (NSRC) and South Slave (SSRC) Research Centres are currently closed.  All of the WARC research support and logistical services for outside researchers are suspended at this time. 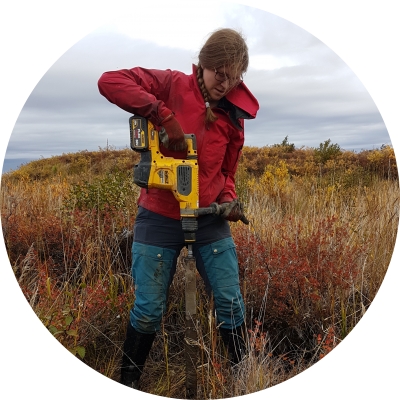 I have participated in permafrost research in the Arctic since 2011. I first came to Inuvik in 2015 to conduct my Master's research looking at ground thermal regimes and vegetation succession at a site on Richard Island. Following that initial field excursion, I returned on three occasions in the succeeding two years before moving to Inuvik permanently in 2018 upon finishing university.

My current work focuses on increasing the capacity and communication of permafrost research in the western Arctic, as well as conducting research to better understand the influence of environmental variables spatially and temporally on ground thermal regimes. Another interest of mine is establishing a more extensive network of long-term monitoring sites and making this data available for the public. I am currently working on a snow manipulation project along the Inuvik-Tuktoyaktuk Highway to examine the influence of snow compaction on permafrost ground thermal regimes, active layer thickness, and vegetation conditions. Since becoming the Permafrost Specialist in Inuvik I have presented at the Canadian Permafrost Conference and Tuktoyaktuk Science Day in August 2019. Additionally, I will be assisting with GeoWeek and Science Rendezvous in the communities as well as attending the Yellowknife Geoscience Forum in Yellowknife. Lastly, I am working with local partners to assist in increasing community-based permafrost monitoring and training.