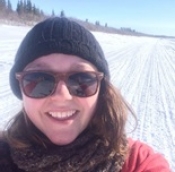 I’ve worked in applied science and research for over ten years, with a focus on water resources. More specifically, I’m interested in what landscape-level factors control the hydrology and geochemistry of freshwater systems in Arctic regions. Along with scientists from the Water and Climate Impacts Research Centre (W-CIRC) in Victoria, BC, I’ve co-developed a research program titled “Impacts of Natural and Anthropogenic Disturbances on Tundra Upland Lakes” that looks at how recent wild fires, thaw slumping, and the construction of the Inuvik to Tuktoyaktuk Highway affect lakes in the upland region east of Inuvik. I’m also interested in how thaw slumping affects water runoff to Kugmallit Bay, which is the focus of my Beaufort Sea Coastal Restoration program. Finally, in collaboration with the NWT Geological Survey, I’m studying the role of latitude, seasonal variability, and surficial geology in driving the water quality of streams located along the Dempster and Inuvik-Tuktoyaktuk Highway corridor.

Before joining the team at the Aurora Research Institute, I worked at the Climatology Laboratory at York University in Ontario, and at W-CIRC at the University of Victoria. I currently represent the Aurora Research Institute on the Northwest Territories Regional Contaminants Committee, the Cumulative Impacts Monitoring Program, the Beaufort Sea Partnership, the Canadian Network for Northern Research Operators, and the International Network for Terrestrial Monitoring in the Arctic.